A contrast that has often boggled me is the idea of confidence and humility. I strongly believe we are to be both, but to be honest, I think this is a difficult balance. As our lead minister, Tom, says, “It’s not one or the other, it’s both.” So, how are we to be both? How are we to walk this fine line as a Christian leader? 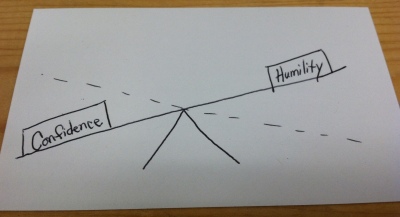 This idea popped in my head just the other day when I was filling out one of the numerous nomination forms for our high school students (another thing I did not realize I would be doing as much as I do). The form asked about the student’s strengths and weaknesses. While I listed humility as a strength, I also found myself listing the lack of confidence as a weaker area. Then, I began thinking and realized again how difficult this is. In all honesty, it is something I struggle with as well. When others evaluate my ministry, I often find similar responses. Further, it is the same thing I see in myself. I often want to be confident and stand up for Christ and His Kingdom, but at the same time, I do not want to seem overbearing and have a “Look at me!” type of attitude. After all, it is about God — not me.

Then, I read Scriptures that say, “Such confidence we have through Christ before God” (2 Cor. 3:4), followed by others that say, “All of you, clothe yourselves with humility toward one another, because, ‘God opposes the proud but shows favor to the humble'” (1 Peter 5:5). It is obvious that both are important to God, but where is the fulcrum in this equation? Where should we draw the line? I think it resides, as it usually does, in Christ. In Him, we see the perfect balance of Godly confidence and Godly humility.

With further study, I came across Scriptures such as, “Blessed is the one who trusts in the Lord, whose confidence is in Him” (Jeremiah 17:7), “And now, dear children, continue in Him, so that when He appears we may be confident and unashamed before Him at His coming” (1 John 2:28), and “Who is wise and understanding among you? Let them show it by their good life, by deeds done in the humility that comes from wisdom” (James 3:13).

It seems that our confidence needs to come straight from God. As we hand out lives over to Him, and as we look to Him, we will begin to see that we are nothing compared to Him. In that moment is where true humility resides. In that instance, we are confronted with the fact that we are in the presence of the Almighty God of the Universe, and we are nothing but a little speck on earth. And then, at that same moment, we realize that this God loves us with all His being. He loves us enough to make this entire world for us and sent His Son to die in our place. This Almighty God has our back! That is where the confidence comes in. It is not confidence that we have in ourselves. Paul says that self-confidence is foolish (2 Cor. 11:7). Instead, it is a confidence that comes from wisdom — an understanding that God is so much bigger than us, and He wants what is best for us.

As I seek to find this balance within my own life, I urge you to do the same. Find yourself in the presence of the one true God, realize exactly who He is, and then realize that He loves you. Then, I believe, you will be able to humble yourself before God while also remaining confident in Him.